Tate Britain
If One Thing Matters, Everything Matters
June 6 – Sept. 14

German-born photographer Wolfgang Tillmans, Turner Prize winner in 2000, clipped and taped unframed photographs directly to the walls in Tate Britain for his retrospective exhibition. The early photos of friends in unusual situations create a surprisingly casual impression (Alex & Lutz Sitting in the Trees [1992]). On the other hand, the montage Chemistry Square, which is constructed from close-up shots of clubbers is not about the individuals, but the atmosphere the environment creates. The shots from everyday life (a vase with flowers, the Concorde, a rat crawling away from garbage) make it difficult to perceive individual works.
Later, in 1999 and 2000, Tillmans concentrated more on experiments with negatives. The subsequent Blushes — abstract color images of thread-like lines on white background — were apparently made by drawing with a light source while developing the film. In combination with particular photographs arose disturbed, layered and almost dreamy pictures (Icestorm).

A boat decorated by Damien Hirst transported visitors from Tate Britain to Tate Modern, with the latter putting on a show of 23 international photographers titled Cruel and Tender. According to curator Emma Dexter they all take part in “the exploration of contemporary existence from an emotionless perspective,” and “focus on a kind of realism that avoids romance, sentiment and nostalgia, and instead advocate a clear, impartial view.” Of course this kind of distance from photographers is not easy to attain, and, in fact, the exhibition creates the opposite effect, stirring up a whole gamut of emotions.
Matador Rineke Dijkstra, photographed after a bullfight in his torn and blood-stained coat, and a woman after childbirth (one hour, day and month later) are utterly hypnotizing. Not even Walker Evans with his typical documentary style can disavow empathy and interest in his models. Since 1975, Nicholas Nixon has photographed his wife and her sisters every year. While the first shot shows young girls, gradually before our eyes the image of the women changes. No other objects are visible, only the figures, and through the intimate description of aging the viewer becomes a part of their life fates.
Stephen Shore, a pioneer in color photography, rose to fame with his photo-diaries from his travels through the United States. He portrays the people he meets and often even the food he ate, as if the daily rhythm of the food defined the time. The hard conditions of life and poor homeless in large-format prints by Boris Mikhailov contrast with the revolting excess of seaside tourists by Martin Parr. William Eggleston considers his photography “parts of a novel I’m writing” and in fact, he described only certain moments in the story, hinting at past events and stirring up interest in future ones. For example, in Morton, Mississippi, an old man holds a gun in his hand, however, he doesn’t come across as aggressive, perhaps only balanced and assertive.
A considerable part of the exhibition dealt with industrial zones. Berndt and Hilla Becher focused on the esthetic quality of industrial buildings, gas tanks and waterworks, while the city streets of Lee Friedlander were blanketed in a dark smoke. The description of present day “mega consumption” by Andreas Gursky was complemented by Robert Adam, who was interested in the robustness and functional design of the new supermarkets of the 1970s.

The Photographers’ Gallery
The Mexican photo-journalist Enrique Metinides would have fit in perfectly with the exhibition “Cruel and Tender,” and The Photographers’ Gallery only showed the tip of the iceberg of his more than 50 years of work in newspapers. Metinides’s documentary shots of car accidents, suicides and death offer information on events, but more than anything they illustrate human characteristics: the courage of rescue workers, the irresponsible man who died attempting to hook up pirate equipment to a telecommunication site, the carelessness of an attempted suicide and the ever-present crowd. With no hesitation Metinides takes pictures of a girl crying over her dead boyfriend, inside a wrecked car or men submerged in water to pull out a drowned body. Even though he depicts the unfortunate, death and shock, he makes the most of the moments “afterward” with a kind of peace that borders on beauty.

Serpentine Gallery
Photography fans also headed for the Serpentine for an exhibition of Cindy Sherman, whose recent photos however lacked the tension of her previous work. The focus of the entire retrospective exhibition was a project made for Vogue magazine. Sherman, outfitted with a collection of clothes by well-known and alternative fashion designers and wearing heavy make-up, brought into existence fictitious figures of clowns on a computer modified background. Here she didn’t repeat the ability to recycle previous originals of her own brand names using only herself as the model in various disguises and props, but this time included the tragicomic grimaces and masquerades of clowns. 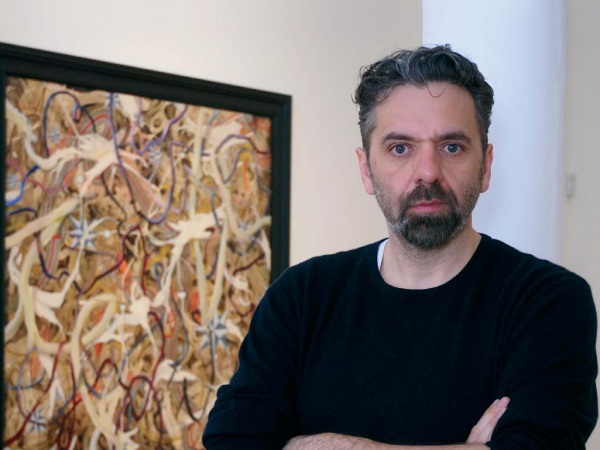